Gartner Refrigeration opened its doors with two primary goals: To embrace and refine evolving technologies in industrial refrigeration, and to work closely with our customers throughout each step of their application process.

In 2020, as we mark our seventy-fifth year of providing refrigeration solutions to the food industry and others, we look back and acknowledge we’ve performed our job well. Yes, we’re proud of our design and construction abilities and accomplishments. But more, we’re appreciative to each and every customer for helping make Gartner what we are today:  a refrigeration specialist with a 75-year reputation for innovation and a genuine partnership philosophy.

Join us for a look back at Gartner history… and the evolution of industrial refrigeration. 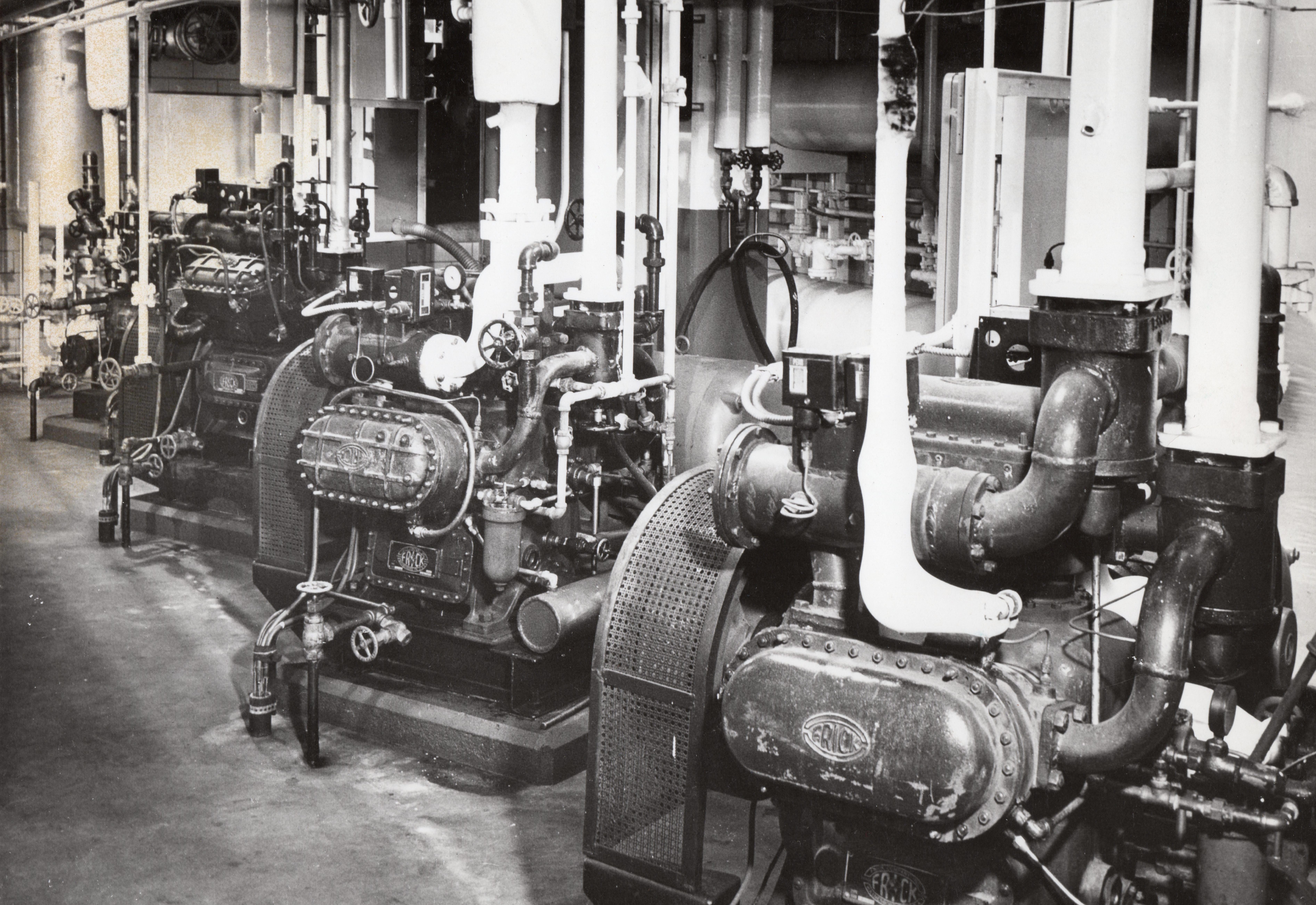 1910
Leipzig, Germany
The Land of Opportunity

Family patriarch Otto Gartner, a steel mill worker struggling to feed an ever-growing family during a time of economic strife, casts his eyes and hopes to America.

Fate pointed the way to the town of Brainerd, a bustling northern Minnesota community thriving on timber and the shipment of ore, from nearby iron range country.

1920
Chicago, IL
Refrigeration is in the Blood

In the early 1920s, Art, the eldest son, made a move that was to cause a ripple effect for the next several decades. He attained a position with Westerlin Campbell, at the time the nation’s largest York Refrigeration contractor with regional offices throughout the country.

One by one, the brothers followed. Art paved the way for the Gartner boys to improve their lot by utilizing their substantial mechanical abilities during the formative years of industrial refrigeration. Youngest sons Herb and George benefited as the recipients of the older brothers’ contribution to their secondary educations, which would prove invaluable down the road.

Herb Gartner was a man who preferred to plot his own course. Following a brief tenure at the electric utility in Duluth he went on to work at Westerlin Campbell in Chicago and Grand Rapids, MI.

Wanderlust struck again during the early war years, when Herb relocated to Minneapolis and worked for Rosemount as an independent contractor on a power plant project. He also began working out of his garage, calling on refrigeration customers part-time.

Meanwhile, World War II found George based at Fort Belmont, Virginia, perfecting U.S. Marine landing craft and early outboard motors. Following his discharge, George joined York as an engineer, then he too, moved on to Duluth.

Tragically, Al who had started Gartner Refrigeration in Duluth, and Kurt, his brother, had died in separate accidents, so George pitched in and ran the service department for Al’s widow.

Not long thereafter, in the summer of 1945, George drove to Minneapolis to join Herb in operating Gartner

1945
A Foundation of Partnership

In October 1945, Herb and George formalized their partnership and set out to establish the fledgling company. The close of the war brought unusual opportunities, such as boxcar loads of lockers that two enterprising young men might sell and install in meat locker plants. They did, and with such success that a meat locker became the company’s first logo.

Hotel air-conditioning work was another mainstay in the early days, which led Herb and George to a novel affiliation with professional figure skater Dorothy Lewis.

Gartner Refrigeration was chosen to create compact ice rinks in hotel lobbies and ballrooms for Dorothy to perform on. As the exhibitions grew in popularity, Herb & George developed a portable configuration of their ice making apparatus and traveled the country creating indoor rinks.

A Foundation of Partnership

This willingness to apply emerging technologies to challenging applications was to become a Gartner trademark. Nothing excited Herb and George Gartner more than new technology. Whenever a significant advancement in refrigeration occurred, the brothers were among the first to grasp and apply it.

Such was the case with ammonia and the two-stage blast freezer, the twin catalysts into the ice cream and dairy business. For more than four decades, this industry has consistently looked to Gartner for cost­ saving solutions that stem from innovative thinking and hands-on skill.

Following incorporation in 1949, Gartner was selected as a representative for Frick Company, today the nation’s leading manufacturer of rotary screw compressors.

Old-timers in the turkey industry still recall how birds were once processed with feathers intact. This “New York” dressing, as it was called, gave way in the mid-50s to a completely viscerated and cleaned bird, frozen in the bag.

Gartner played a major role in that transition, as we were the first contractor to adapt the two-stage blast freezer used in ice cream applications to turkey processing. The result was a fast, hard freeze and chalk-white appearance that offered greater shelf life and visual appeal than New York dressed birds.

Gil Powers, the long-time Vice President of Engineering for Norbest Turkey, took note. Gil was in the process of establishing turkey cooperatives and facilities throughout the Midwest.

Gil shared Herb’s and George’s enthusiasm for new technology and chose Gartner as his installation contractor for that very reason. Our “partner­ ship ” with Gil continues into his semi-retirement, more than 40 years later.

1960
Evolution of the Compressor

The early massive horizontal compressors gave way to vertical single-acting models, followed by multi-cylinder reciprocating units, then rotary vane technology. Gartner was at the forefront of each transition, installing the newer, more efficient configurations in a wide range of customer applications.

The 1960’s saw a move to increase the speed of the multi cylinder Reciprocating Compressors such as the Frick Eclipse. Gartner played a major role by increasing the Eclipse’s Speed and efficiency.

In the mid-1960’s, Gartner installed the refrigeration and piping for twin 60,000-ton ammonia storage tanks at Central Farmer ‘s Fertilizer – the first and largest ammonia storage facility of its kind in the Upper Midwest. A string of indoor skating and hockey arenas followed, including the facility at the original Minneapolis Auditorium. Next came food distribution centers for Red Owl, May Company and National T.

1970
Portland, OR
Evolution of the Compressor

1970
The Next Generation Comes Aboard

Herb Gartner fathered three daughters, one named Sherry, who years ago caught the eye of a college student named John Hendrickson. It wasn’t long before John found himself driving truck for his new father-in-law Herb, and attending night classes at Dunwoody Institute. Rising from service to construction to sales to management, John became part-owner in” 1974 and was named President in 1976.

The Next Generation Comes Aboard

George ‘s youngest son, George F., yet another Gartner with refrigeration in his genes, graduated from the University of Minnesota and joined Gartner in 1980, like his family predecessors starting at the bottom and working his way up. After working as a project foreman and sales engineer, George F. attained the position of Vice President of Communications. Although George F. is no longer with the company, he remains part of Gartner’s colorful history.

Herb and George retired in the mid-1970s, after instilling their doctrine of innovation and partnership into the new generation.

To succeed as an industrial refrigeration contractor takes more than mechanical aptitude and a thorough understanding of ammonia technology. It requires the ability to adapt to provide solutions across a full spectrum of applications, each with its own quirks and challenges.

In 1982, Gartner moved to an 11,000 square foot St. Louis Park facility, which housed engineering, sales, service and management under one convenient roof. The early ’80s also saw a resurgence in the turkey industry, as plants began processing and marketing turkey parts in addition to whole birds. Ice cream installations took a leap forward as well, soon to be followed by french fries and other frozen processed foods.

When a family name hangs above a business entrance for five decades, its members must be doing something right. For starters, Gartner has been fortunate to retain some of the industry ‘s finest refrigeration specialists, backed by a skilled and experienced support staff. All are deeply dedicated to customer service and support.

We’re appreciative to Frick Company, for allowing us to modify and help perfect their refrigeration equipment. By translating customer requirements into equipment recommendations, Gartner serves as a critical link between factory and field. It’s a role that maintains our position at the leading edge and ensures the right technology for each application.

Without our industry customers, however, there would not be a story to tell. Founders Herb and George Gartner established our partnership legacy early on, and our customers have responded with loyalty. For 50 years, Gartner has rolled up its sleeves, providing the best in technology and support. In the words of John Hendrickson, “That’s the way it will continue to be.”

From the 50th Anniversary in 1995 we continued to expand our business in both volume and geographically.

The range of new work varied from suppling a ground freeze system with 9,000 HP of refrigeration equipment for 9 gold mines in Timmins Ontario to a multitude of refrigeration systems for distribution warehouses in Massachusetts, Maryland, New York, Connecticut, New Jersey, and Pennsylvania.

We had an entertaining year in 2000 with the concern that the computerized control system would fail at the start of the millennium. Fortunately, it was a non-occurrence.

In the 2000's we had a huge increase in frozen food throughout the country. From frozen goods in South Carolina, Ohio, Utah, to pizzas in Minnesota, Kansas, and Mexican entrees in California.

2010 to 2020 we saw the beginning of automatics in the form of high-rise freezer, cooler and distribution warehouses along with a change in the dairy industry with the organic milk growth.

We also expanded our scope to include cooling for the distilling industry in Kentucky and Minnesota.

In 2018 we diversified with new equity partners to position ourselves for continued growth and after 2 years are celebrating our 75th year anniversary and are looking forward along with our supporting staff of long term employees to the next 25 years and future celebration of 100.

Have A Unique or special request? Contact gartner today!